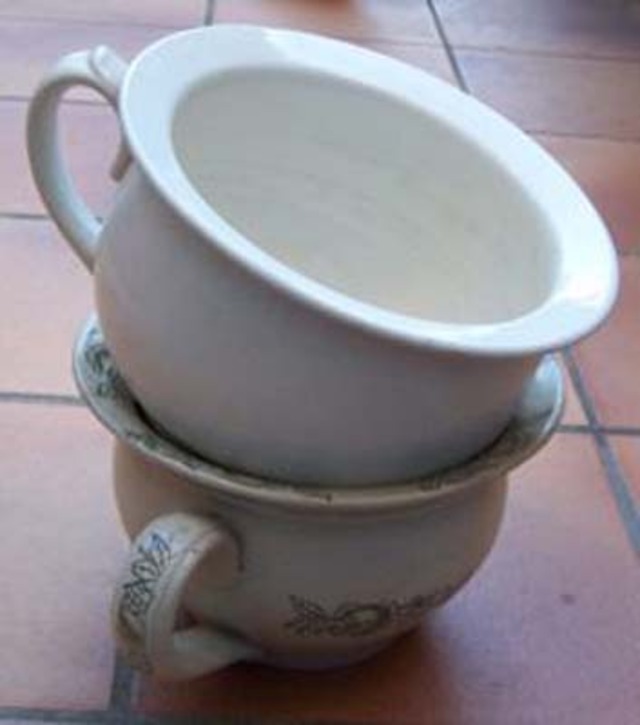 Select image to pin for chimmy ×

grannybin Aug 19, 2009
tenselTobago
Andy Sep 23, 2014
Called in Barbados a "Po" I think they mean a "pot" but probably mistook the French pronunciation.
Also the classy expression is..'The white lady with hands akimbo" 'Potty" is for the kids.
Sleepyeyes007 Jan 13, 2015
"Chimmy" In Jamaica it's just a pot in the 70-80s Era,It's what our grandparents Used to Urinate in At night when they woke up during the late night hours,and they would empty it in the morning when the got Up "Chinmy"...
Leblack Feb 25, 2015
The pot Called "Dodoo" in Suriname and in some part of French Guyane
Still in use for exactly the same purpose as "sleepyeyes 007"'s comment above
But also use to steam the vagina with special herbs or leafs
The practice
It help with
Mensuel pain
Vagina deases
Fertility
Tight vagina
Smell
And lot more
Antoinette May 28, 2015
I know it as 'posey' used in the manner described above as chamber pot.
Wolf Walterson Jan 20, 2016
I grew up in the '60s with my mother and grandmother who, coming from Jamaica, referred to the pee-can as a chimmy. I thought the term British (Mom & Gma came to the US before Jamaican independence), until I read the post above claiming the regional term as Jamaican for chamber pot. That pleases me.
Cherry Jul 07, 2017
Yes that's what my parents and grandparents usually use in the 70's. Also known as the pee pot
Potty /posey Jul 15, 2018
Yep In stvincentb it’s called a potty or posey and I used it when I was little I’m 45 and still remember 👍🏽
Joyce Apr 12, 2020
I had to wash the chimmy every morning as my duty. My father had an enamel chimmy. I have a plastic one home, keep it as souvenir.
Leona Mar 02, 2021
I am using the Posey to do Sits bath, once the Posey is properly positioned on/around the toilet it feels wonderful to sit and let the steam from the hot water enters the private area it feels soothing especially after the bath. It was one of my sibling duty to empty the Posey in the morning,, but she did not liked to empty it when there was feces mixed with urine. Doing this chore continues in G
Leona Mar 02, 2021
It is Sitz' bath, not Sits bath I Leon stands corrected
Godfrey Chimmy Dau Apr 22, 2021
It means complete
Carol May 31, 2021
Born in 1956 Manchester England my parents were from Jamaica, I remember every bedroom had an emamal "chimmy " under the beds. The thing is, you would pray you wouldn't spill the chimmy on the way to the bathroom to empty it.. oh! such wonderful memories.
Bobby Sep 19, 2021
chimmy
Vee Apr 04, 2022
I remember one time I was tired an worn out with all my household chores as a child my grandma woke me in the middle of the night to relieve myself and I couldn't make it to the washroom so I pulled the posey my eyes were still closed and somewhat open also but I will always remember that was my last time using it my grandma gave me a good licken there and then saying I big enough not to use that.
Sign in